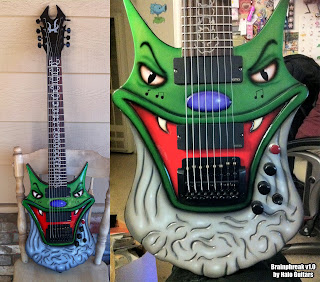 Finally after about 6 months of waiting and working with the guys over at Halo Guitars the beast is born. On my birthday of all days (June 13th) I took this monster home perfectly setup and ready to jam just in time for a nice 10 day vacation from work. I highly recommend the work of Halo as they pay attention to detail and keep you in the loop during the entire process. If you are thinking of purchasing a monster of your own, head on over to Halo Guitars and let them know Don White aka Brainphreak sent you for an extra 10% off! If you happen to live in the bay area of California, head on over to their shop in San Jose to see their work in person and talk about the birth of these creatures.
Interesting Origins of the Brainphreak concept
When I was about 17 I worked at a used music store repairing amps for 'experience' in my field of study. I was a beginner in guitar just learning through tutorials on the internet and by playing Black Sabbath cover songs with a crappy Ibanez that I bought used for 99$. At "Muzik Musik" I was just a kid making only about 20-40$ a day and working only about 2 days a month while in college...  I finally saved up and was able to get a second guitar as my paycheck from the owner, this was a Gibson Epiphone. I was excited this guitar had been modified with a steinberger bridge and was actually played by a professional musician so it was properly setup (for the most part). I think I probably saved about 150$ and he gave me this guitar worth about 2-250$. He was a very nice guy to get me started.
After getting attached to this new axe and me being passionate about art and painting for many years prior. I decided to paint a face on the new guitar with acrylic paints my mother gave me. I knew it may take some time to dry, but now I had two guitars so this was acceptable.  After I finished the painting it was easily damaged and only water based paint (ceramcoat), so I needed a lacquer to protect it and shine like you expect on any guitar. I was pretty poor at the time so I asked around for a few days until a friend of mine who's father was a painter was able to get me some clear lacquer that was out in his garage for years. I finally was able to seal the guitar in clear coat!

Below is a picture of that original guitar I have had since 17. 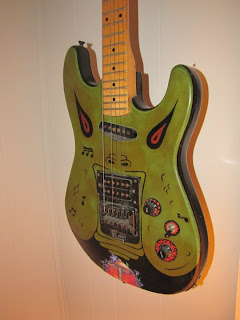 Strange occurrence... After painting this guitar the lacquer would NOT DRY! Later it was explained to me that the hardening agent probably had evaporated over the years leaving me with a clear tacky gelatinous covered guitar... I waited for days... weeks... months... Finally after about 2-3 months I gave up and started just playing it. It was dry enough that it would not leave fingerprints, but if you pushed your nail into it, you would leave a nice dent in the finish... The coat was also not very shiny as it had collected dust particles etc. over the weeks as it was drying. One very strange thing about the guitar while in this state... When I dug into the finish, bumped the guitar against something hard etc. and it left damage... Over the next few days the damage would 'heal itself' since it was a slow moving liquid and would flatten out the dents... Very odd, but pretty cool. ITS ALIVE!

Ever since that experience with this guitar, I always wanted to do it again to a guitar the RIGHT way, now that I am not poor and a teenager... However I have not tried it again since.  I buy guitars only with finishes I love and have not been brave enough to mess it up, maybe someday I will buy some cheap crappy guitar and paint it up again for fun.
Still has its paintjob!


The Birth of the Halo Brainphreak v1.0
In 2010 I met Jeff at Halo Guitars when I stopped by to take a look at their custom 10 string guitar. Halo is one of the only companies out there who has a 10 string for sale and I found they were local here in San Jose! What luck! I went down there to see if it was something I wanted to purchase since they had a working model in their show room. After talking to Jeff I realized that they could potentially work with me to build the ultimate Brainphreak guitar instead!

After the initial talks I went home and sketched up a quick design to see if this was even possible... 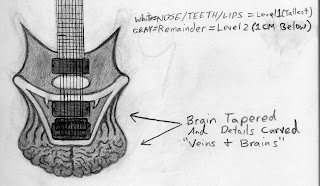 Original Concept Sketch
Amazingly enough the guys over at Halo would have no problem turning this into a reality. After further talk about the carving of the body, a custom paint job, making the guitar 8 strings, adding a kill switch, custom inlay etc. I found that this was all possible at Halo! I immediately went to work on creating the sketches for the carving, the colors, and the inlay. I was going to make the headstock custom as well, but the stock Halo headstock was hard for me to top, so I kept it. 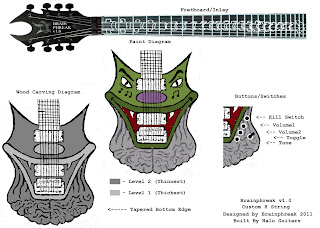 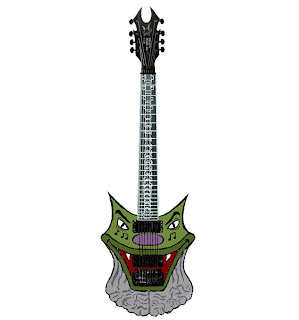 Next the guys over at Halo went to work making sure the design was logical/playable etc. After some work back and forth finalizing the ideas and dimensions of the body, the template was created and sent for my approval before cutting into the real body. 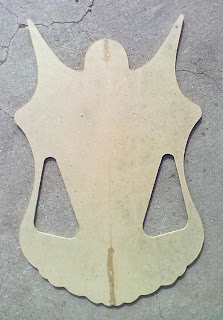 The template looked great so I gave Halo the go ahead to start carving the actual body. 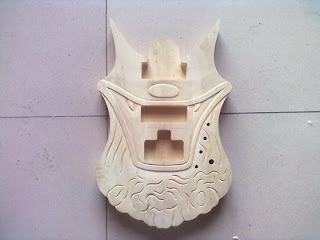 The body was looking great so I began to work with Halo on the custom inlay. I decided this inlay would be a spine in tribute to my back injury I have been dealing with for about a year now. Herniated Discs in my Back 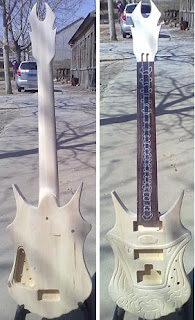 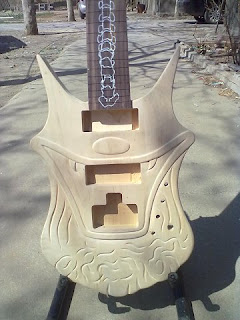 Finally with the guitar mostly built and carved with inlay etc. it was time for the painting. We worked a little on the coloring over the phone and with that it was sent to an airbrush artist here in San Jose. The final result of the paint job was pretty amazing, the pictures do NOT do it justice! 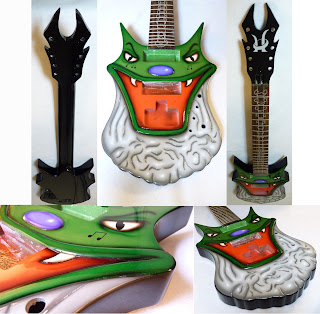 The wait was nerve wracking after seeing this beast was almost done, the final process was to install all the hardware including EMG 808 Pickups, Kahler X-Trem bridge, killswitch, volume/tone knobs, frets, nut etc. and then do the final setup so it plays smooth.

The time waiting was well worth it, the final product is a dream come true and it even sounds better than my existing Schecter and LTD 8-string guitars! Ill be sure to post some video of it in action soon... 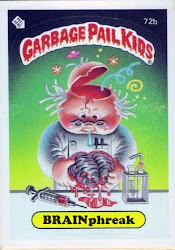 brainphreak
Brainphreak is a Engineer and Artist who has released many technical documents, various forms of artwork, and musical compositions over the past couple decades. Brainphreak's LEGAL recordings of various underground artists in the Bay area can also be found throughout the internet. Here you will find various ramblings, art, music, performances, tips, tricks, treats, or whatever else he wishes to share. Follow here and let your brain... phreak!